The Misery Of Adoption With No Adult Annulment Process Worldwide 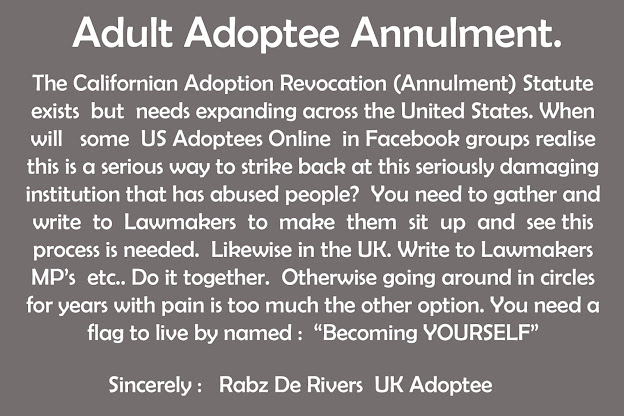 10th Sept 2020 .
There are many pained adoptees all across Facebook and some "birth mothers" who feel lost without children they gave up or were pressured to give up .

What is clear is the pain revolves and revolves  in various adoptee groups and no solutions come easily from the States in parts of the US or elsewhere in the World of adoption where  kids that grow up cannot as Adults even revoke (Annul) abusive adoptions  they experienced. ....

This identity-falsifying institution Of Adoption remains perversly sacrosanct . No one knows why ..... Is it the 11th Commandment ?  "Thou Shalt Remain Adopted!" ..

This paperwork invention clearly works for some Adoptees but not for others at all .. Some are subject to emotional abuses and narcissistic adopters and sexual abuses after being adopted ..

They cannot exactly take cases for a lack of duty of care can they as kids they have already lost the supreme security of birth family ..?

Adult Adoption Annulment - LGBTQ U.S. People Who Adopted Each Other Cannot Marry Each Other 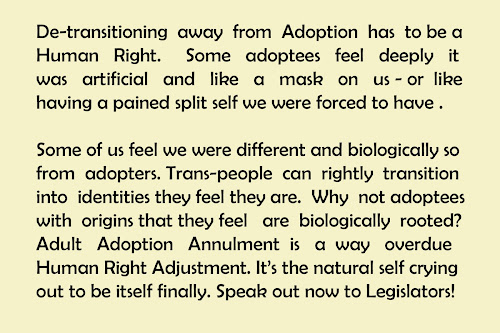 
In a learned document - a Florida Law Review (Keefe)
Adult Adoptee Annulment does not become possible for LGBTQ folk who have resorted  to adoption (for relationship security, estate and will reasons)  prior to same sex marriage laws brought into the US at 2015 .

Because  US judges are resistant to annul adoptions,  but also resistant at the same time to allow marriages to occur for those  LGBTQ "adoptees" who adopted each other,   since the law would mean they are permitting incest!  Read The Review... From the "Introduction".. :

"unless homosexual partners are able to dissolve their adoptive relationship, they will be prohibited from exercising their constitutional right to marry because of state prohibitions on marriage between parents and their children. "
Adoption  you see  is used to create a "parent and child relationship" in law and that is why some States and judges are/have be…
Post a Comment
Read more 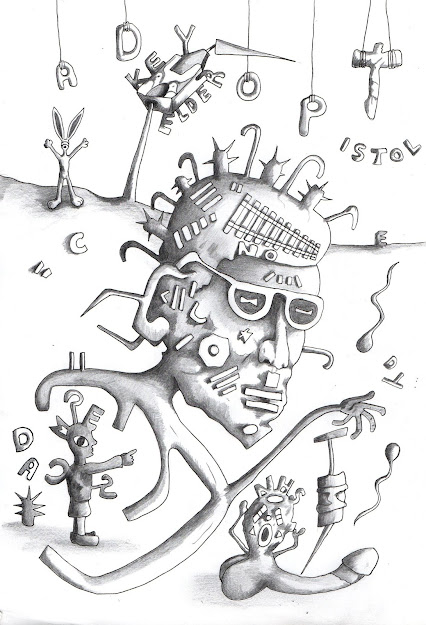 Decoding The Sexual Abuses 8th September 2020  This picture I just had to draw as an Adoptee-Artist - I had to face it .. And,  the awful feelings too right across all my life. Why?  WITNESS that is why. True witness for a child lost long ago because of Adoption to an infertile couple.   In the end my Adoptive father's infertility became my sexual destruction His wife abused me sexually and finally that killed off senses that I could trust any other "body".   Not even my own ... The Death-life I lived was strange and fully endowed with nothingness .. Erect as Iron ..Made of nothing and no feelings.....Occasionally spurting out a bit of leftover life ....That was me . That was my adoptive dad ! That became me too !  That became many men I knew too in the working classes of Birmingham of factory/iron workers with dead looks for life ..They were not adopted though - so I was more like super-iron .. Super dead-alive..Super unfeeling.. 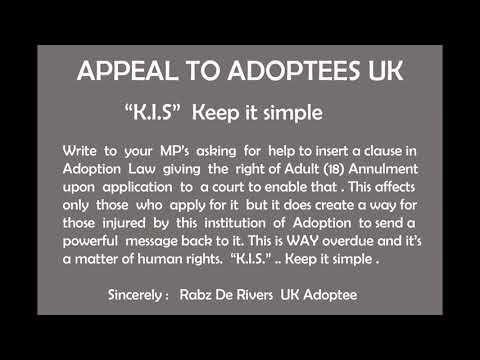 
It's so overdue in an age of Identity Rights with the brave forward guard of Trans-people, quite rightly identifying with their internal world gender of their owned Self-idea of who they are,  for some Adult Adoptees not to be allowed to throw off the artificial identity given to them by the State or others through Adoption Court Orders..... Many Adult Adoptees feel falsely transitioned into an identity NOT THEIRS TOO ..

They need to feel themselves and have it reflected in law properly.

However there is no Adult Adoption Annulment mechanism in laws in the UK or US and only barely in Australia for Adult Adoptees to rescind their status of "Adopted" to that of "Not Adopted"  or "birth identity re-assumed"  or some other suitable  "Adoption discharged"  label.

Why are these Adoption laws so unmodernised and still stuck believing law can dominate by paperwork people's Self-identity?   In …
4 comments
Read more